The following text is an excerpt from my ongoing writings on the films of Jack Chambers. It deals with Hybrid (1967), Chambers’ second film, made in outrage over the Vietnam War. The Canadian Filmmakers Distribution Centre recently released this film on home video, as part of The Films of Jack Chambers.

Jack Chambers travelled to New York in 1966, where he “met with three or four different groups that were protesting America’s role in the war [in Vietnam].”[i] The groups loaned him photos and slides, of Vietnamese children disfigured by napalm, that became the basis for his second film, Hybrid. Along with his rephotography of that material, Chambers would integrate a film on rose gardening that he borrowed and kept from the London Public Library.[ii] Such use of found materials would become central to Chambers’ subsequent films, and while the adoption of mass media images was simultaneously entering his painting process, Hybrid is the first instance of such strategies in his films.[iii] Of his use of found footage, Chambers told Wendy Michener that he believed old films “should be just like earth that you pick up and use,”[iv] much the same as his use of mass media photographs throughout his ‘silver painting’ period. His use of found footage also allowed him to approach subjects that his own photography could not reach, in terms of both their geographic and social barriers, such as footage arising from the Vietnam war, and their historical particularity, such as the class photos of the drowned boy in his Regatta series (1968), and his use of historical photographic sources in his pointillist Sunday Morning No. 1 (1963), a historical pageant of the living and the dead. But found images were also applied as illustrations of life, taken from the everyday. These illustrations could be merged in such ways as to press the limits of their meaning. This strategy of assemblage would first appear in the dueling sequences of Hybrid.

Hybrid is composed of three distinct sections. Each joins footage of horticulture with scenes from the war in Vietnam and the consequence of American aggression against Vietnamese civilians, primarily children. In the first section, the image advances, in hard cuts, through footage of a gardener pruning branches, digging holes and planting bulbs, and stamping soil down with a shovel. He carefully prunes branches and thorns, and inspects his irrigation system. Against this, still images are inserted of American soldiers arriving in Vietnam, of daily life among the agrarian society of Vietnam, and increasingly ominous footage of American soldiers in gas masks, an image specific to American aggression but also the ambiguous image of invasion, the gas mask concealing their human faces and substituting their features for something menacingly inhuman. The gardener handles shears and a shovel with gloved hands, his routine being given macabre significance as the savage intent of the soldiers becomes clear. The camera lingers on the thorns, which then begin to age in a time-lapse, extending up and blooming as the camera rises with it. Vietnamese families move through trenches and waterways while the gardener sprays chemicals on his crop. The gardener becomes the soldier, his horticultural rituals akin to their march.

With the second sequence, the implicit violence of the war images becomes explicit, as torn bodies and scenes of active conflict begin to emerge. The gardener picks a rose and tears the petals away until there is only a bud. He collects the inner petals into a container, and this act of harvesting is held up against images of dead children and families in flight. The inner petals are brushed, against images of a dead mother and child. A bulb is carved up with a knife and planted into a pot of soil, and Vietnamese children are shown in the hospital. The first section had advanced an interconnection between horticulture and war, as a matter of human supremacy over nature. The soldiers demonstrate their mastery of man by killing and conquering their fellow man. This second section furthers Chambers’ analogy by focusing on the production and perpetuation of life, both human and plant; by drawing a parallel between the inner petals, which are essentially being engineered, and child victims of bombings, crossfire, and massacres; and by way of this suggesting something beyond platitudes of innocence or mere condemnation of war, more a lament of man’s need to impose his order and mastery on all things. That the victims in Chambers’ film are children suggests also that this aggression aspires to the very end of man.

The third and final section of the film extends and concludes this analogue: two elements are contrasted, blooming roses, filmed in time lapse as an explosion of saturated reds, whites, and yellows, and still images documenting civilian victims of violence and chemical warfare, primarily children. These elements are joined through dissolves, and this gesture – cutting to a bud in bloom and dissolving into atrocities – repeats twenty times, each time restarting by a hard cut, before ending on a rose in bloom. The roses, when they bloom, always bloom the same way; the victims are far more varied, from shrapnel, bullets, and chemical burns, to the face, to the chest, some bandaged, some not. The rose petals take on an otherworldly nature in their separation of foreground and background, as their colour strikes out from unfathomable blackness. This background isolates them, furthering the sterile horticulture of the gardener, but it also flattens them, so that what was intended as an immersive effect in its original context has had its depth annihilated, and plays as a graphic form, a beautiful burst of colour along a flat plane. With the final two victims, the destruction wrought seems particularly final: first, a child with the lower half of his face missing and a damaged skull, and second, a face that is completely destroyed, peeling up, eyes loose in sockets, recognizable as human only by virtue of its arrangement, but each feature bent into inhumanity. The sequence ends with a rose petal unfolding slowly into luminous red. 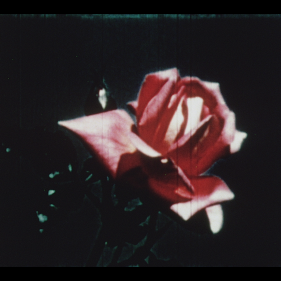 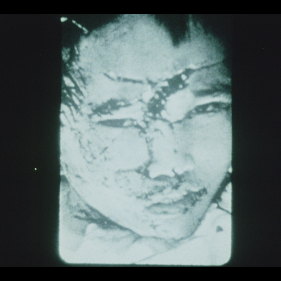 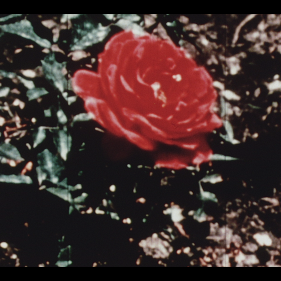 Chambers’ first film, Mosaic, had taught him that the fragmentary reassembly that he had taken up in painting could assume a new force in the recombination of film editing. The editorial process served as a natural mirror to perceptual experience and to insight, in its ability to break suddenly in another direction; for all that is said of rhythm in painting and sculpture, in time-based forms such as film and music, as in the intervals of poetry, rhythm can take a sudden turn. A composition is not merely redirected but splintered in momentum so that it does not bear trace of what came before it, a fact of the editorial sequencing of cinema that Hybrid resists and subverts. From head to tail it combines fragments into a binary montage, each resonating with what came before and what follows. Hybrid set out with a particular purpose, as political statement, and pursued its subject into new aesthetic territory for Chambers. His paintings had already begun to draw from the photographic archive of a greater society at large, but he had not done so with moving images, which came with their own set of formal concerns, particularly in the temporal and sequential. Through Chambers’ sequencing, Hybrid would become a work of simile. It represents a difficult aesthetic gesture, one that opens to both simple and complex meanings, holding to an internal contradiction. But it was read in its time as a game of contrasts rather than a work of simile.[v] The sequencing of the two parts, combined with the confounding beauty of colour and form in the final section, could mislead the viewer into the ready analysis that here, beauty is in conflict with horror. This is true, and yet, Chambers is presenting a more tragic agreement between the mastery of nature and the brutal trials and civilian casualties of war. This agreement assumes a complex and elusive definition, beyond obstacles of ready knowledge and simple meanings, shown here in an indictment of man’s interference with nature, and of man’s aspirations toward a total and godly power.

[ii] Michael Zryd, “Hybrid as Allegory,” in Kathryn Elder (Ed.), The Films of Jack Chambers (Toronto: Cinematheque Ontario, 2002), 65. According to Ross Woodman in an interview with Zryd, “Chambers checked the 16mm film out of the [London Public Library] and cut it up for his film, figuring it would be put to better use and not be missed.”

[v] Matthew Wherry responded to the film in an “autobiographical review,” arguing that Hybrid comprised a binary of “Life-Game” and “Death-Game.” Wherry uses these terms to divide the film’s central strategy, the juxtaposition of the hybrid rose and the disfiguration of children in wartime Vietnam. The autobiographical basis of Wherry’s review quickly emerges, in an account he gives of life on the battlefield during World War Two. His analysis is not concerned with aesthetics, but with treating the work as a social criticism and as a statement of protest. The joining of these images is not as oppositional as ‘juxtaposition’ would suggest, but rather an act of analogy and simile. There is at play a simultaneity of life and death, not interplaying as games of strategy, but confounding in utterance. Wherry sees the rose as a symbol of love, its presence a protest against the hatred and senselessness that lies at the root of the competing image. Wherry’s binary is reductive in this sense: in joining the hybridized rose with these deformed faces, Chambers is not merely holding beauty up against horror, but rather, revealing the corruption of both ‘games’.